Gregg Laswell has been a trial lawyer for over 36 years. He began with a large national firm, where he practiced for 13 years, moved to a large international firm, where he practiced for 7 years, and then joined some of his former partners in 2004 at Hicks Thomas, where he has practiced for the last 16 years. His practice has focused almost exclusively on business and commercial litigation and while he has significant experience in various industries and practice areas, a primary emphasis of his practice has always been in energy and oil and gas, and related industries. His experience in this area runs the gamut, from exploration and production to refining, from oilfield service providers to petrochemical concerns. He has represented pipeline companies; midstream companies; exploration and production companies, both small independents and large national and international companies; oilfield service companies, including offshore drillers and engineering and design companies; refiners; and petrochemical plants. He has represented investors in oil and gas and energy ventures and landowners in disputes with oil and gas operators. And his representation of the wide range of clients in this area includes all aspects of their business, from commercial contracts to business torts, and has included insurance disputes, indemnity claims, environmental claims, and disputes regarding ownership of oil, gas and other minerals.

While Mr. Laswell has extensive litigation experience in the energy and related industries, his practice over the years has not been limited to that field. He also has considerable experience in prosecuting and defending securities actions, both federal and state, and defending professional liability claims. And, as a business and commercial trial lawyer, he has been exposed to many industries outside the energy sector, including real estate concerns, companies in the healthcare arena, and financial institutions. He also has significant experience in corporate governance issues, disputes involving both large companies and small closely held companies. And, as the legal landscape has changed over his 36 years of practice to include more alternative dispute resolution proceedings, especially arbitrations, his practice has expanded to meet this need, especially in the international oil and gas arena. Mr. Laswell has significant experience in arbitrations of all types, both international and more localized proceedings.

Mr. Laswell has been recognized by his peers with an AV® Preeminent™ Rating with Martindale-Hubbell®, and has also been recognized as a “Texas Super Lawyer” by Thomson Reuters in years 2005-2010 and from 2014 through the current year.

Oil and Gas and Energy Litigation 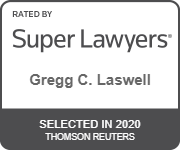