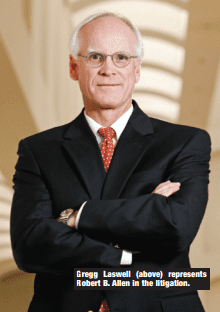 Gregg Laswell of the Texas commercial litigation firm Hicks Thomas LLP is representing Robert B. Allen, a man pursing compensation from his former law partner for a lucrative gas deal. According to Allen, Trevor Rees-Jones offered Allen a deal that returned $8.2 million, when Allen should have earned an additional $100 million.

Allen and Rees-Jones met as law partners. When Rees-Jones quit practicing law to pursue a career in the oil and gas industry, he offered Allen the opportunity to invest. Through a $700 investment and $34,000 certificate of deposit, Allen became an eight percent owner in Rees-Jones’ company, Chief Holdings.

In 2003, Rees-Jones sent a letter to Allen, offering to buy his interest in the company for $8.2 million based on a $138.3 million valuation of the company. Allen accepted the deal in 2004, and Chief announced it was for sale in 2005. One year later, Devon Energy bought Chief for $2.6 billion.

Laswell said, “The bottom line is that certain events…had not been disclosed to Allen before the redemption and those events really made the profits and the company much different than what had been explained to him.”

With the help of Laswell, Allen sued Rees-Jones and Devon. According to Allen, Rees-Jones and Chief failed to provide integral information that may have influenced his decision to sell interest in the company.

According to an opinion by the 1st Court, these stipulations shouldn’t keep Allen from bringing fraud claims against Rees-Jones and Devon.

1st Court Justice Harvey Brown said, “Rees-Jones and Devon have misconstrued the nature of Allen’s claim.” According to Justice Brown, Allen’s claim is not that Rees-Jones and Chief omitted facts regarding the company’s value, but that they failed to provide material facts affecting his decision to redeem interest in the company at all.

“Allen contends that for a founding investor in a start-up company, the question is not only whether the price offered for his interest is fair, but whether the investor would be better-off in the long run if he retained his interest,” said Justice Brown.

Laswell likened the deal to a husband who allows his wife to put him through law school and then leaves her. “This company wouldn’t have ever got off the ground without this initial investment,” Laswell stated. He said he is pleased with the court’s decision.