Her response is immediate. When you ask Courtney Ervin to describe herself as a lawyer, she says, “I’m a problem-solver.” While she is one of the top up-and-coming trial lawyers in Texas, she also finds immense satisfaction using her business acumen to defuse disputes early, when possible.

“Look, I welcome a good fight,” says Ervin. “That’s an essential part of a trial lawyer’s DNA. However, I never forget that my clients call me when they have a problem, which means they’d rather never have to call me. So when they do, it’s my responsibility to find quick and efficient solutions so they can get back to business with the least amount of disruption.”

Ms. Ervin literally grew up in business; her father spent his entire career in the energy industry - as a business executive at a major exploration and production company - based in Houston. His career moved the family to The Hague, The Netherlands and London, England, providing Courtney with a global perspective to relationships and problem solving. Her familiarity and nuanced understanding of solving complex business issues has made her an invaluable asset to her clients in finding creative and effective solutions to disputes. She takes particular pride in the fact that she has worked on important, cutting-edge energy matters involving first-of-its kind business ventures.

Her focus is on high-stakes commercial litigation in state and federal court and in arbitration. Her clients include business of all sizes in the oil and gas, energy, insurance, construction, real estate, private equity, information technology, and health care industries She has a wealth of experience involving energy-related and insurance coverage litigation serving as lead counsel for a global exploration and production company and for one of the largest commercial property casualty insurance companies.

While she is passionate about serving her clients and eschews personal accolades, she is piling up the honors. Ms. Ervin was recognized as Best Lawyers in America in 2021, identified as a Future Star by Benchmark in 2021, named a Texas Super Lawyer in 2020, and profiled as one of the leading Energy Litigation lawyers in the U.S. in 2016 by The Legal 500. She earned her law degree from the University of Houston Law Center, magna cum laude, and her bachelor’s of science degree from Colorado State University. Ms. Ervin is a member of the State Bar of Texas, Houston Bar Association and the Texas Bar Foundation. 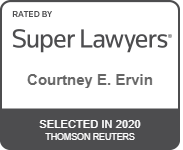