“John Thomas is one of a kind and a CEO’s best friend. I spent my career building and growing a company I loved. When lawsuits threatened it, I turned to him for help. Not only did he chart a path forward, but he leveraged what was happening in the courtroom into a business strategy we could use in the boardroom. John is an attorney who never waivers. Who keeps pressing forward in lockstep with his clients’ goals. If I have to go into a foxhole, I want him with me.” – Steve Stagner, President & CEO, Mattress Firm

Attorneys who don’t understand your business and its long-term goals won’t get you very far. For John Thomas, the goal is to anticipate his clients’ needs from the courtroom to the boardroom. To solve the problem at hand, as well as those you may face six months down the line.

The ability to craft business-centered legal strategies is what he’s known for, and why CEOs and general counsels across the country have come to rely on his counsel and expertise. Those he’s served include…

…Mattress Firm, Inc. (one of the country’s largest retailers) as national counsel for businesses at risk of losing their properties as a result of closures precipitated by the COVID-19 pandemic. Also represented company in highly publicized litigation against its long-time supplier Tempur-Sealy, Inc. after news of the breakup resulted in TSI stock dropping nearly $1 billion in market capitalization.

…Ina-Naftaplin (the Croatian National Oil Company “INA”) in international arbitration tried in London and New York and involving claims that INA was guilty of tortious interference with a Texas company’s alleged rights to a Syrian oil concession.

…The King Ranch against Exxon when the ranch barred its mineral lessee’s access to its land based on claims of improper operating practices.

…Union Pacific Railroad in litigation against a major Gulf Coast plastics shipper who claimed over $100 million in damages for the alleged breach of a favored nation’s clause in a rail transportation contract.

…JP Morgan Chase before the International Arbitration Association involving its claim for damages for breach of the joint venture agreement that established one of the largest credit card portfolios in the world.

…Occidental Petroleum in international arbitration against BP following its $3.6 billion acquisition of Permian Based assets.

…The Independent Directors of Reliant Energy (including former U.S. Secretary of State James A. Baker) in numerous proceedings spawned by federal investigations and lawsuits resulting from allegations that the company engaged in improper commodity trading practices.

With a practice that’s served both plaintiffs and defendants for over 30 years, clients have come to know Mr. Thomas’ as an attorney who hits the ground running.

Mr. Thomas has repeatedly been recognized by clients and colleagues for his work in Commercial and Intellectual Property Litigation.

One area Mr. Thomas excels in is advocating on behalf of his clients in cases being litigated in the court of public opinion. Whether in the courtroom or speaking with a reporter, he understands how to make his client’s case and aggressively pursue their goals.

Following are just a few examples of Mr. Thomas’ work for clients:

J.P. Morgan Chase – The worldwide financial services provider brought in Mr. Thomas to handle a matter before the International Arbitration Association that involved one of the largest credit card portfolios in the world. The lawsuit, which included jurisdictional disputes in New York and Houston, centered on the banking joint venture assembled to develop the co-branded Shell MasterCard. Facing off against Shell and Citibank, Mr. Thomas sought a substantial award against Chase’s joint venture partner, as well as a ruling that Chase was the owner of the accounts. After expedited discovery, the case was successfully tried before a Houston arbitrator before being resolved under confidential terms.

Reliant Energy – When investigators from the Securities and Exchange Commission (SEC) and the U.S. Commodity Futures Trading Commission leveled their aim at Texas-based Reliant Energy, the company’s board of directors called on Mr. Thomas to protect their individual interests. Government investigators set out to prove that Reliant had engaged in improper commodity trading practices in order to boost the company’s trading volumes and sales revenues. Reliant eventually agreed to a settlement with the SEC, but Mr. Thomas’ clients successfully emerged with no findings of wrongdoing.

King Ranch – When the owners of this historic Texas ranch found their property under siege, they called on Mr. Thomas to help unravel a 120-year-old legal battle. King Ranch founder Richard King was sued in the 1880s by the wife of a former business partner over her late husband’s interest in the 15,500 acres of land that later would become the centerpiece of the King Ranch cattle empire. That case eventually settled, with the business partner’s widow selling her property interests for $5,800. When the business partner’s heirs tried to undo the sale nearly 120 years later, Mr. Thomas successfully defended King Ranch by winning a ruling from the Supreme Court of Texas that preserved the earlier sale and confirmed the rightful owners of the King Ranch.

R.R. Street & Co. Inc. – Also known as Street’s, this company is one of the nation’s leading providers of detergents and process additives to the dry cleaning industry. Mr. Thomas’ track record on behalf of the company is just one reason why he has been Street’s go-to national counsel for more than 15 years. In addition to wins in courtroom trials and appeals, Mr. Thomas has become a trusted adviser to the company’s leaders based on his experienced counsel and proven business acumen. He has successfully defended Street’s in numerous individual cases filed across the U.S. by dry cleaners, local municipalities and various water authorities. In all, Mr. Thomas and his team have defeated hundreds of millions of dollars in product liability claims brought against the company. In addition to prevailing in multiple product liability jury trials in California and Texas, Mr. Thomas also obtained a win for Street’s at the Supreme Court of Texas in a case of first impression under the Texas Solid Waste Disposal Act. 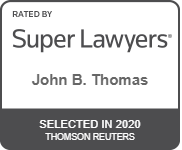